Students and staff from across the world of sport and exercise at the University of Edinburgh are uniting in support for International Women’s Day. We #ChooseToChallenge.

About International Women's Day  International Women's Day is a global day celebrating the social, economic, cultural and political achievements of women. The day also marks a call to action for accelerating gender parity. Significant activity is witnessed worldwide as groups come together to celebrate women's achievements or rally for women's equality.

I’m a strong believer in fairness and taking positive action against discrimination in all aspects of life. So, as an avid paddler, when Scottish Canoe Association (SCA) called for volunteers to join their Equality Group (EG), I was really keen to get involved.

The SCA EG supports inclusion in paddlesport and is looking at inequalities with regard to the protected characteristics, including gender. The statistics clearly show that women are proportionately under-represented in paddlesport, so the SCA EG set up the Female Equality Group (FEG) with three core aims:

Lara Cooper is the SCA lead of the FEG. Lara is an outstanding paddler and inspirational role model for our sport and I #ChooseToChallenge in support of Lara, the SCA FEG and the participation of women in paddlesport at all levels.

On International Women’s Day 2021 the SCA FEG are launching a promoted calendar of female specific paddling courses to support and raise awareness of these opportunities. To find out more about what we are doing and discover paddlesport opportunities for women in Scotland, visit https://www.canoescotland.org/go-paddling/women-go-paddling/

Members of Edinburgh University Touch Rugby Club share how they #ChooseToChallenge and how the club creates an inclusive environment for all. 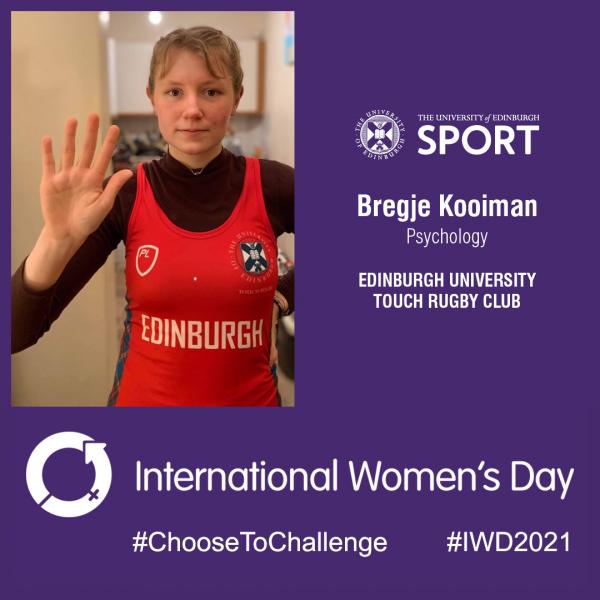 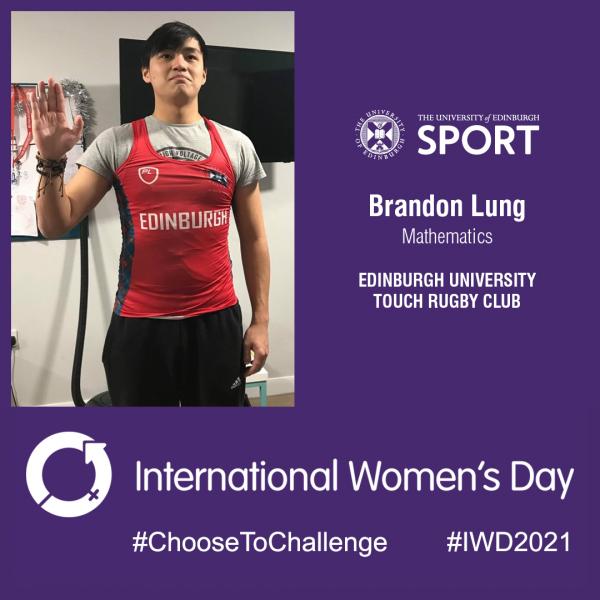 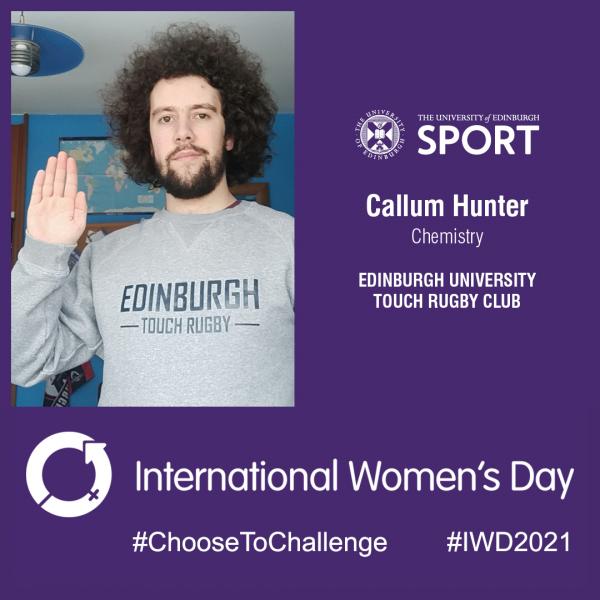 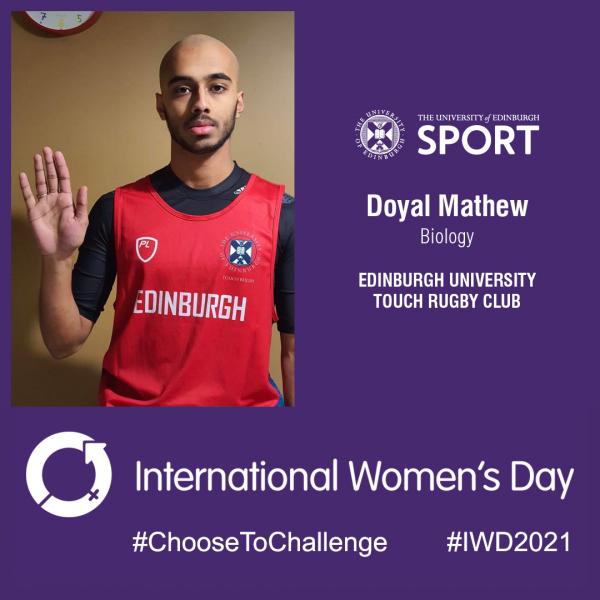 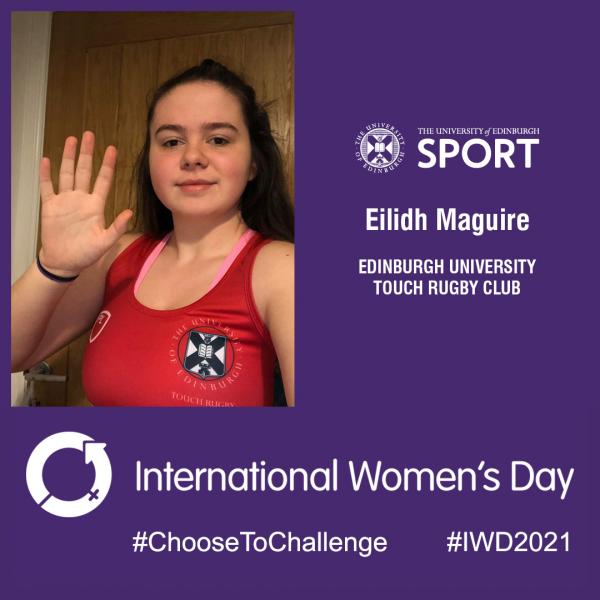 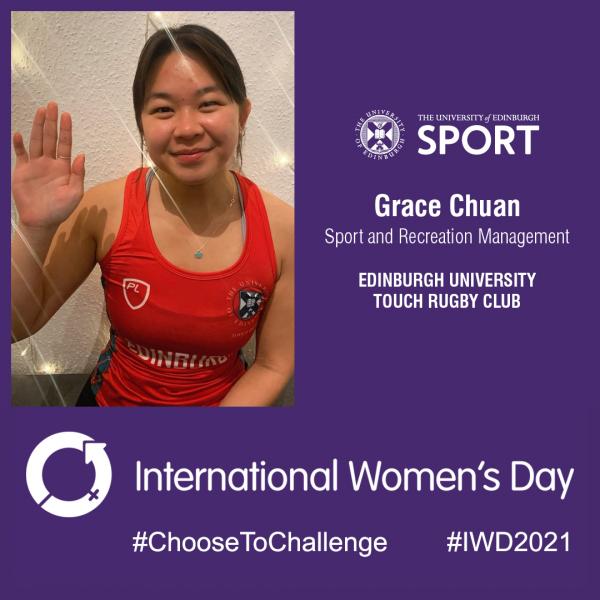 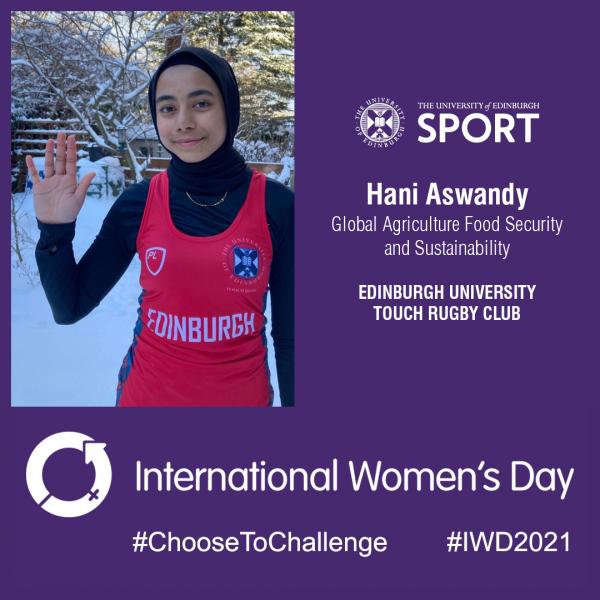 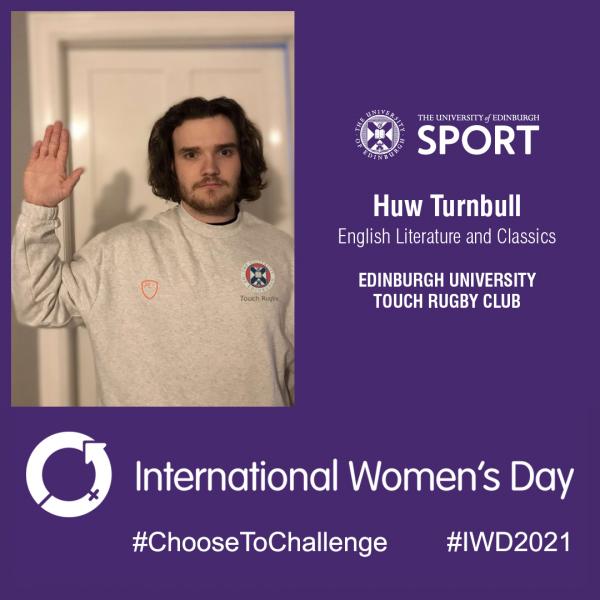 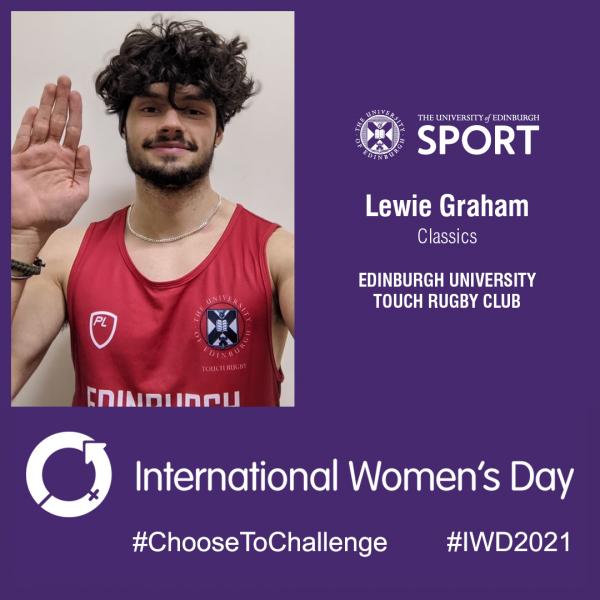 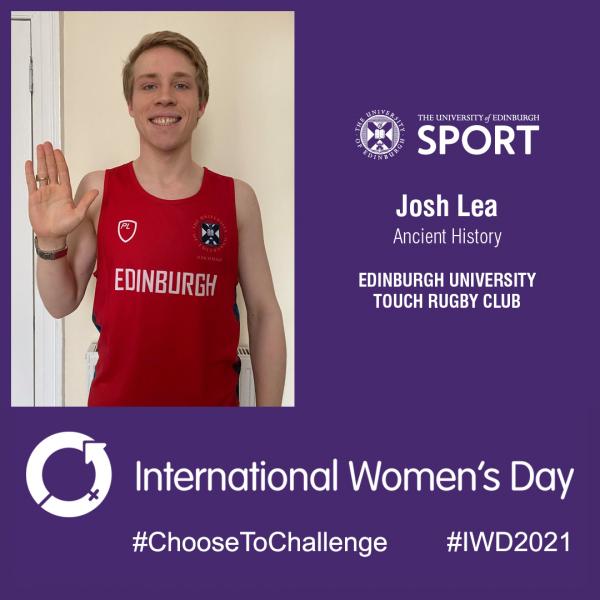 Dr Hayat Sindi is the first female member of the Consultive Assembly for Saudi Arabia, and also the first woman from the Persian Gulf to receive a doctorate. she invented a biochemical sensor that features thermoelastic probes, and she created the Magnetic Acoustic Resonance Sensor (MARS), both of which help diagnose illnesses quickly and on-site - which has been a crucial to developing countries to help diagnose diseases without having to spend a lot of money. One of the key quotes from Dr Hayat Sindi is to “find a mission in life and contribute something to humanity” which is very motivating to keep even more people to pursue their dreams in life whilst also giving back to the community.

I #choosetochallenge because for too long, women have been underrepresented and underappreciated within the sporting arena. I am grateful to be on a team that celebrates and is inclusive of all genders. Personally, I am committed to making sure everyone I interact with has the opportunity to rise up and succeed instead of knocking each other down to get ahead. As a member of a sport union club, I strive to ensure we are building a community that encourages women to stand up and speak up in order to make their voices heard, not only on the field but also in positions of power.

I think a lot of inequality is hard to understand if you haven’t experienced it first-hand. In my experience, the exclusion of women within sport happens when we don’t allow people to be bad at something. I've given up on a lot of sports because I’ve not been given the space to progress, not being challenged to grow, and not being taken seriously starting out. With touch, I’ve now been pushed out of my comfort zone into more challenging roles, and I’ve learnt and grown from them. I can't wait to see where I go from here!

It is hard to argue that Rugby Union at school isn’t dominated by boys. Having played for the entirety of secondary school and college, I never witnessed a female counterpart team or integrated training. I recognise this now as a symptom of the wider systematic expectations of gender. However, when I arrived at Edinburgh University, wary of further head injury, but still keen to play rugby, the Touch Rugby Club presented a great opportunity. It was incredible to finally play a form of rugby alongside women, who were just as skilled, confident and important to the sport as the men. People of all sporting backgrounds, genders, sizes and skill levels are welcomed at UOE Touch. And that extended beyond the pitch too. The committee is smoothly operated by a group of diligent, considerate and experienced men and women who constantly drive the club forward in performance and inclusivity. It is my first experience of a truly mixed gender sport and a great example for other sports at the University and across the country.

Edinburgh Touch Rugby Club is inspiring in how they try to encourage women in sport to participate and become active members of the club. The committee itself is mainly composed of women in touch who are passionate about the sport where it seems that they make decisions on behalf of the club and keeping the club in check

Touch rugby as a sport is inclusive as it incorporates both men and women and encourages them to work equally in order to be successful. However, since joining the club I am more aware of my privileges as a man playing sport and so I strive to include as many women as possible when playing touch so as to increase inclusivity and to use what privileges I have for better equality.

As a new member of the Touch Rugby club, it’s been refreshing to see how the members create an environment where people of all backgrounds can participate freely and feel included.

Having swam competitively for 8 years - a sport where males and females train and compete together - gender difference was never an issue nor a consideration. I started touch rugby at Uni, where again, both males and females train and play together. In my experience, gender difference is again not an issue. I didn’t specifically choose these sports because of this but I do feel that both of these sports are setting an example on gender equality in sport that others could learn from in order to pave the way towards true gender equality in sport.

Story: Having played sport all my life, it wasn't until coming to university that I had tried out touch rugby. I immediately fell in love with it and with the relaxed and inclusive environment that it created. Being available to anyone who's interested and not splitting teams based on gender, the club has allowed me to meet and make friends with people I otherwise possibly wouldn't have. I really hope that by continuing to play and improve the sport, we can improve people's awareness of the game, and its presence amongst other sports as one for everyone.