Foteini Spingou specialises in the cultural and intellectual history of the interconnected medieval Mediterranean world (with a special focus on Byzantium). Her areas of research and teaching include the formation of identity and memory in imperial societies and cultures, the history of collections and collecting, visual and textual aesthetics, and manuscript culture from the late antique East to the early modern Europe.

Born in Nice, France, and raised in Athens, Greece, Dr Spingou earned her first degree in Greek Philology from the University of Athens (2007). She subsequently received a MPhil (History/Wolfson, 2010) and a DPhil (MML/Keble, 2013) from the University of Oxford. Before joining Edinburgh University, Dr Spingou conducted research for the Department of Art and Archaeology of Princeton University, the Classics Faculty of Oxford University, the Pontifical Institute for Mediaeval Studies (University of Toronto), and the Dumbarton Oaks Research Library and Collection (Harvard University). Her research has received recognition from a number of sources, including the Mary Jaharis Center for Byzantine Art and Culture, Dumbarton Oaks Research Library and Collection, the A. S. Onassis Foundation, the A.G. Leventis Foundation, and the Nikos & Lydia Tricha Foundation for Education and European Culture. Dr Spingou has taught at a number of institutions, including the University of Oxford and the Open Universities in Greece and Cyprus.

Secretary of the Classical Association of Scotland (Edinburgh and South East)

Member of the Editorial Team of  the Journal of Modern Hellenism

Wakelet on Byzantine Text on Art and Aesthetics (online resource)

Dr Spingou's work bridges the gap between visual and literary culture by unearthing previously unknown texts, mentalities and events. By asking the five Ws, Spingou places text and image in context and uncovers the road to identity transformation in pre-modern societies of the Mediterranean.

Dr Spingou’s first book, Devotion and Propaganda in Byzantium: Anonymous poetry from the Anthologia Marciana for Oxford University Press edits 256 so-far unknown poems all to be found in a manuscript in Venice. The texts reveal previously unseen sights of intellectual life, politics, and society in the Medieval Balkans and the East Mediterranean. The book discusses the use of poetry as a commodity in and beyond Byzantium presenting texts that in their majority were to be inscribed on objects or performed on a particular occasion and were then to be discarded.

Dr Spingou is the editor of the two-volumes work The Visual Culture of Later Byzantium (c.1081– c.1350) for the series Sources for Byzantine Art History (Cambridge, 2021) explores the full range of the connotations of the Byzantine aesthetics in the Medieval world. This work is conceived as an 'exhibition' of texts that will allow specialists and non-specialist to read and engage with primary sources on the cultural and intellectual life of Byzantium and the wider Mediterranean. This work includes more than 150 medieval sources from nine medieval linguistic traditions (Greek, Latin, Slavic, Hebrew, Arabic, Syriac, Armenian, Georgian, Old Norse) that refer to the Byzantine visual culture. All texts are presented in their original language with facing English translation accompanied by introduction and commentary.

Dr Spingou has also prepared studies on late antique textiles and published on a wide range of topics, including poetry, dialogues, epistolography, political theology in Byzantium, the interplay between religious rituals and literature, as well as medieval mathematics. 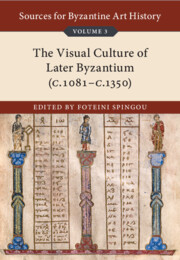 Tracing traditions, but escaping from an area-bound field of study, Dr Spingou's work seeks to place research questions in a comparative framework while highlighting continuities and changes within a culture. Her current book project, Byzantine Kállos/Classical Éthos, examines the transformation of the traditionally conservative idea of kállos (beauty) in the Byzantine longue durée (c.700–c.1350). The book traces Byzantine descriptions and understandings of beauty that echoed the ethos of the Greco-Roman classics and explains transformations of a cultural idea within a socio-political context. In an era of decolonisation of knowledge, the book explores how the Byzantines dealt with their own, often uncomfortable, intellectual choices.

Research questions addressed in the book however are not confined in a singularly 'Greek' context. The collaboration with Sinologists, in separate articles, allows the comparison of parallel phenomena in Song China and Byzantium and brings to light supra-cultural patterns of change in the history of ideas.

An ardent promoter of digital humanities, Dr Spingou is currently responsible for the development of the Database of Byzantine literati. DBL is an open resource that generates data in forms allowing to map the movement of literati in space (maps) and society (graphs of social/cultural/financial capital), as well as their connections in society (social networks).

In the past, Dr Spingou has organised public events on videogames and ancient history and has given public talks on Byzantine devotion and classicisms at Oxford and Edinburgh.

Dr Spingou has taught courses on church and empire in Byzantium, late antique and Byzantine art, Greek culture and literature from the Hellenistic times to Byzantium, as well as Greek language and palaeography.

Dr Spingou is happy to discuss students' research at both MA and PhD level in the fields of Byzantine cultural/intellectual history, art and literature.

The list below is a subset of the information held on the University of Edinburgh PURE system, and includes Books, Chapters, Articles and Conference contributions. For a full list, including details of other publication types (e.g. reviews), please see the Edinburgh Research Explorer page for Dr Foteini Spingou.

Spingou, F. (2012) Revisiting Lips Monastery. The Inscription at the Theotokos Church Once Again. The Byzantinist, pp. 16–19

Spingou, F. (2019) Ritual and politics in the Pantocrator: A lament in two acts for Piroska's son. In: Sághy, M. and Ousterhout, R. (eds.) Piroska and the Pantokrator: Dynastic Memory, Healing and Salvation in Komnenian Constantinople. Central European University Press, pp. 305-322

Spingou, F. (2017) The supreme power of the armour and the veneration of the Emperor’s body in twelfth-century Byzantium. In: Mroziewicz , K. and Sroczyński, A. (eds.) Premodern Rulership and Contemporary Political Power: The King’s Body Never Dies. Amsterdam: Amsterdam University Press, pp. 47–72DOI: https://doi.org/10.5117/9789462983311

Spingou, F. (2017) A platonising dialogue from the twelfth century: The logos of Soterichos Panteugenos. In: Cameron, A. and Gaul, N. (eds.) Dialogues and Debates from Late Antiquity to Late Byzantium. Abingdon: Taylor & Francis, pp. 123–136