The University encourages students to take a broad range of courses in their first two years of study, and to develop their generic and disciplinary skills, in the knowledge that they will not be penalised in their final degree outcome. The majority of undergraduate degrees at the University are classified based on the average mark for all courses taken in the third and fourth year of study (the Honours years), weighted according to the number of credits allocated to the course. Courses taken in the Honours years are usually weighted equally according to their credit (i.e. every 10 credits has the same value), since they represent study at the same level (Scottish Credit and Qualifications Framework Level 10). Using a broad range of courses to reach a classification allows students to demonstrate competency in a variety of subjects, and offers the opportunity to offset weaker performance in some courses.

For programmes involving optional study abroad in the third year, the degree classification is based solely on performance in the final year of study. This is due to the fact that, although students undertaking study at partner institutions abroad do so at an equivalent level to their peers in Edinburgh, it is not possible reliably to translate marks awarded at other institutions into marks on the University’s Common Marking Scheme.

Five-year Integrated Masters programmes base their classification on the final three years of study, with the final one or two years usually weighted more heavily. This reflects the development which students are expected to achieve in the final stages of the programme.

The regulations to be followed for classifying degrees are included in the Taught Assessment Regulations.

Students must meet the requirements set out in the Degree Regulations and Programmes of Study. 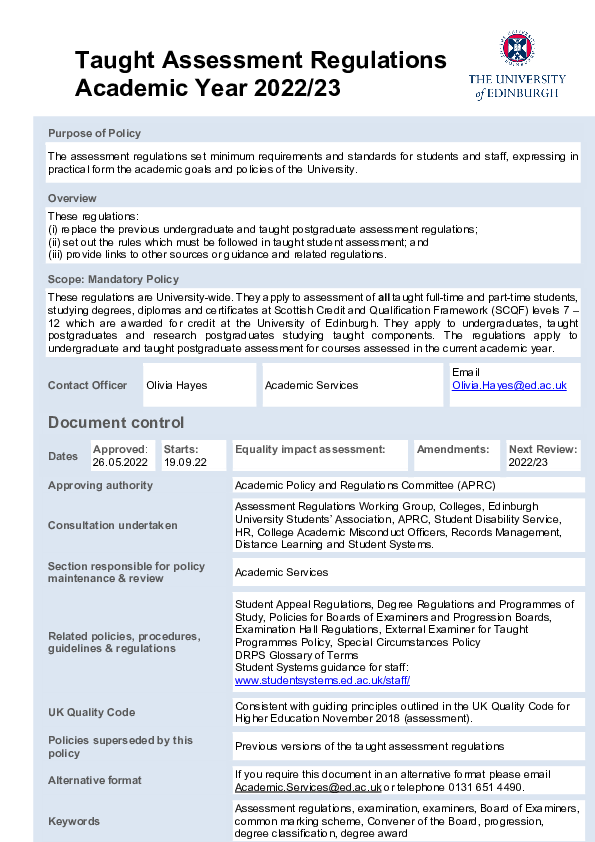